skip to main | skip to sidebar

Today we worked FLOW. We had stick & knife vs stick & knife. Then we went Knife vs 2 knives. Then we worked the defense against the "shank". And then we worked finding flow in the sambuts. Then we worked counter for counter using only Maningkabau postures from sumatran Silat ground fighting. First unarmed then with knife and kermabits on the ground with out the ability to "STAND UP". Talk about CARDIO! After the session we did some Tenaga Dalam & Hoshin Tao Chi kung to recoup and heal any injuries we had a few nicks, and hit noses, and a few sore backs. But thank God all that went away with a little Energy Healing.

It seems to me that the best teacher in the martial arts is the art itself and movement. Bottom line is you just have to move and not have people feed you a "SET" pattern or angles. Just have them feed you random attacks with full intent to get your mind/body moving and dealing with the stress. We started slow so we could "SEE" & "FEEL". But as time went on we just kept going and allowed the SILAT to express itself. In the end there is no JURU no FORM no Langkah no Sambut, all that stuff has to become natural and part of who you are and how you move. The REAL SILAT is the freedom and effeciency of motion with intent and breath to back it up. I could be wrong but it follows nature. Do we see lightning striking, hurricanes destroying, and volcanoes exploding in set patterns????
There may be some but its all natural movement and expression of the elements. Ultimately this is where your SILAT has to go. 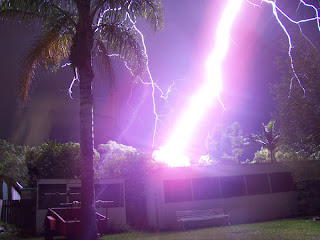 This pic is great! I hope there house didn't explode! Talk about KILAT!!!!
Posted by Silatyogi at 11:36 AM